According to a report by The New York Times, the wars raging in the Congo are the deadliest on earth since World War II. In fact, the Second Congolese War (the one being fought right now) is also known as “Africa’s World War” because most of Africa is involved in the conflict. Trying to trace the war to its source reveals a web of knotted alliances, half-resolved conflicts, cultural tensions, racial rivalries. The unfinished story of the Rwandan genocide drags on in the Democratic Republic of Congo (DRC), where the perpetrators of the genocide fled the Rwandan government to recover and reestablish military strength. The Rwandan government followed these warlords into the DRC in 1998 to prevent their return to power. War broke out between these two groups, but they were not the only ones in conflict. The UN estimates that 25 different militias have organized across the DRC. Some organized for power, others for land, for money, to protect the people of an area, guard political interests, or for access to localized resources. The most infamous of these militias is the Lord’s Resistance Army, led by warlord Joseph Kony, who is known for using child soldiers.

Ultimately, the Second Congolese War is a result of a weak government in the DRC. It has become a country where rebel factions go to regroup. The Congolese government’s army is often criticized for being ineffective. The New York Times reports that Congolese soldiers often go without pay because of government corruption. Although the Congo is a rich area, its diamonds and rich farmland have served to draw power-hungry groups to the area instead of empowering native Congolese. 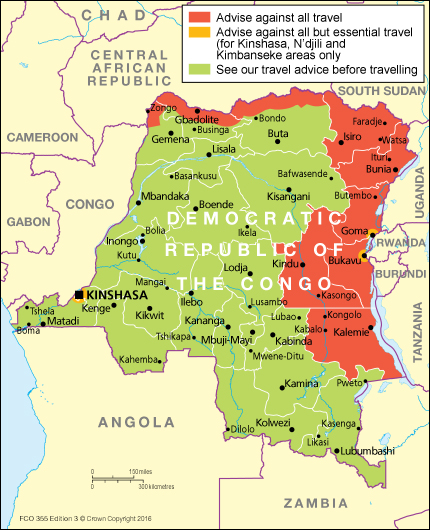 This map shows areas of the DRC where the UK has issued travel warnings because of conflict. Image Credit: https://www.gov.uk/foreign-travel-advice/democratic-republic-of-the-congo

An article by the BBC estimates that the effects of war have claimed the lives of five million people: for perspective, that’s more than half the population of the state of Michigan. Starvation and disease were the main culprits. Congolese women are especially vulnerable. A human rights activist recently called the Congo “the most dangerous place in the world to be a woman.” The UN has named it “the rape capital of the world.” A 2011 study found that 48 women were raped every hour in the DRC. Rape and sexual violence are routinely used as a dehumanizing war tactic. Genocidal rape is a terrible weapon: it creates terror and forces families to relocate, and it instills shame and a fear of returning to one’s home.

As the conflicts drag on, the DRC is eroded and distorted by war. An enormous U.N. peacekeeping presence is doing little to alleviate the military factions and rebel militias festering there. Families who flee from the fighting end up in refugee camps like the one pictured below, where rows of tents form brick-like rows. Laundry waves tiredly in the wind. The countryside stretches forever beyond the hills of Rwanda and Burundi, and somewhere beyond the camp, the war goes on.

After years of waiting in refugee camps, refugees arrive in their settlement countries. Yet the obstacles they encounter there are also perilous. Beginning from scratch in a new country, surrounded by a foreign language, an unfamiliar school system, and unexpected bills is a frightening reality. Imagine navigating employment in a brand-new language, heeding the small print in an indecipherable housing lease, scraping together change for the bus or working out how to get to the store without a car.

This is the journey of Congolese refugees. The exodus of Congolese out of their home country is not likely to end soon. Thousands of people have fled the DRC and are waiting in refugee camps in neighboring countries for a loan that will cover a one-way plane ticket. America, Germany, Switzerland and other countries are preparing to receive them. When they arrive, these refugees will have a chance to begin again.

The difficulties are great, but hope for a new life is greater.

November 15, 2017 Funding a nonprofit happens in many ways. Government funding, corporate donors, and…

The world is bursting at the seams with an overwhelming number of refugee crises. To…

August 3, 2016 “According to the Constitution, some powers belong to the states. What is…